Things are bad. Really bad. You want to do the right thing and make the bad thing better. We wish life would be as simple as making the Monsters Under the Bed go away just by sticking heads in rooms. Sadly, that doesn’t work. We have to name the Monster, get the facts on it, make possible meanings of the data in the context, and assign significance to meanings made, so we can cast the proper spells to make it go away. 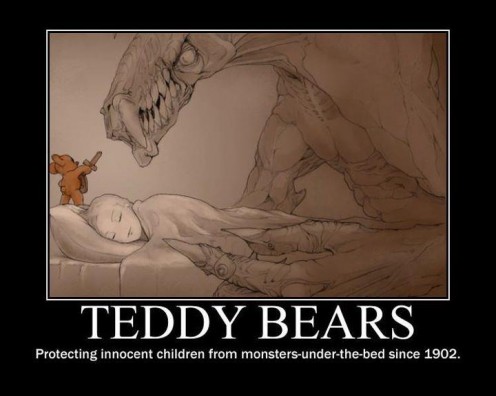 Although some modern religions were engineered for obvious political reasons, most ancient ones apparently stem from another integral human aspect: the rather rare ability to sense a certain order behind seeming chaos and to perceive invisible forces at work in the world. Many of these once worshipped forces have been identified and defined by science and are now generally accepted to exist and to indeed rule our world. Lightning and electricity for instance; wind and the motion of seas; the most intricate but singular biosphere ...

The replacement of hunter & gatherer by agricultural ways seems to have co-incided with noticed new phenomena, fears and hierarchies of deities.

The concept of monotheism seems to have deep roots in western world, going back as far as ancient Egypt, before the formation of the ancient state of israel or the advent of christianity, when Akhenaten imposed a belief system on his people centering around a single deity, the aten or sun-disk. Akhenaten's "revolution" in religion was short-lived, but it is possible that aten worship inspired or in some way sparked the development of monotheism later [1]. 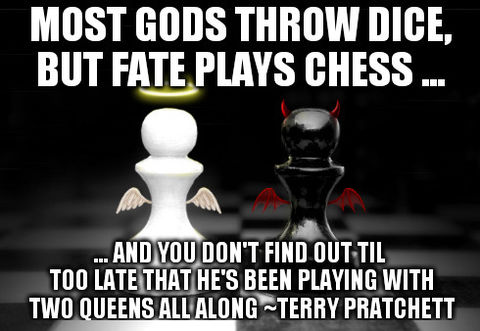 It is easy to forget that every development in the history of the American information industry–from the telephone to radio to film–once existed in an open and chaotic marketplace inhabited by entrepreneurs and utopians, just as the Internet does today. Each of these, however, grew to be dominated by a monopolist or cartel: will the Internet follow the same fate? Could the Web –the entire flow of information– come to be ruled by a corporate leviathan in possession of “the master switch”?

"I don't believe in fate"

"But what if you're supposed to believe in fate?"

Montgomery McFate, an anthropologist at the Office of Naval Research, thinks anthropological knowledge is essential to modern warfare, and is on a campaign to bring this Gospel to the Department of Defense. Her long article at RedNova — originally published by the Military Review — is a backhanded compliment to stubborn anthropologists whose knowledge and expertise is “urgently needed in time of war” but who, “bound by their own ethical code and sunk in a mire of postmodernism”, “entirely neglect U.S. forces” [2]. 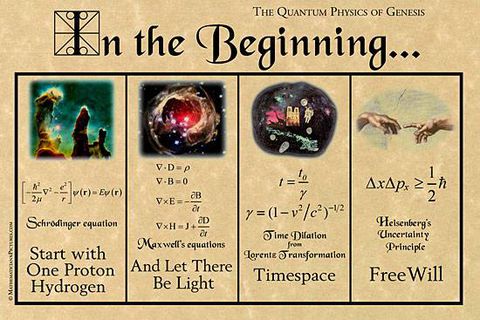 ... accepting that uncertainty exists not due to a lack of knowledge but thanks to a fundamental law doesn’t sit well with some physicists. One famous dissenter was Einstein, who was contemptuous of the idea that unpredictability could be integral to the physical laws governing the universe. Oscar Dahlsten, a theoretical physicist from the University of Oxford, says that a lot of people still intuitively feel that the uncertainty principle should not hold up. Researchers have searched for a solution via “hidden variables”, which may be operating behind the scenes, making things look weirder than they actually are. So far, though, this approach has failed.

Stephanie Wehner and Esther Hänggi at the National University of Singapore’s Centre for Quantum Technology have taken a new tack, recasting the uncertainty principle in the language of information theory. What if the two properties of a single object that cannot be known simultaneously can be thought of as two streams of information encoded in the same particle? In the same way that you can’t know a particle’s momentum and location to an arbitrarily high level of accuracy, you also can’t completely decode both of these messages. If you figure out how to read message 1 more accurately, then your ability to decrypt message 2 becomes more limited.

Next Stephanie and Esther calculated what happens if they loosen the limits of the uncertainty principle in this scenario, allowing the messages to be better decoded and letting you access information that you wouldn’t have had when the uncertainty principle was in force. Wehner and Hänggi conclude that this is the same as getting more useful energy, or work, out of a system than is put in, which is forbidden by the second law of thermodynamics [3]. 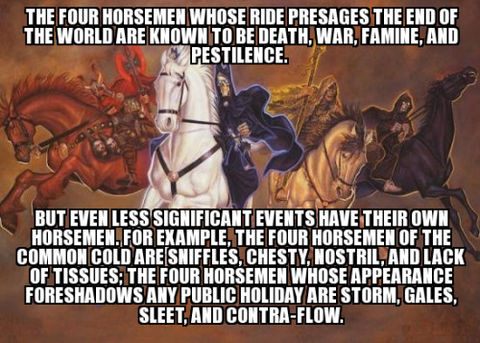 On the 30th of September 2007, Richard Dawkins, Daniel Dennett, Sam Harris and Christopher Hitchens sat down for a first-of-its-kind, unmoderated 2-hour discussion, convened by RDFRS and filmed by Josh Timonen [4]. All four authors have recently received a large amount of media attention for their writings against religion – some positive, and some negative. In this conversation the group trades stories of the public’s reaction to their recent books, their unexpected successes, criticisms and common misrepresentations. They discuss the tough questions about religion that face the world today, and propose new strategies for going forward.

The Four Horsemen is also an award winning independent feature documentary which "lifts the lid on how the world really works" [5]. 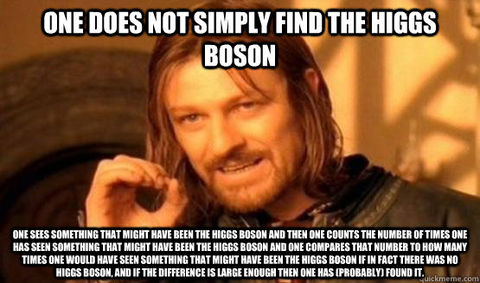 On July 4, 2012 scientists at CERN announced that they found a particle that behaved the way they expect the Higgs boson to behave [6] as described in the standard model developed in the early 70s. The model comes from particle physics, a field filled with physicists dedicated to reducing our complicated universe to its most basic building blocks: 12 different matter particles and four forces [7]. The 12 particles are subdivided in six quarks and six leptons. Quarks make up protons and neutrons, and leptons include the electron and the electron neutrino, its neutrally charged counterpart. Scientists think leptons and quarks are indivisible; impossible to break apart into smaller particles. The standard model also acknowledges four forces: gravity, electromagnetic, strong and weak.

The standard model has been very effective, aside from its failure to fit in gravity and its missing piece, the Higgs boson, that was reported found by the CERN scientists. A new study by a group of scientists from the University of Southern Denmark raises the possibility that the data collected from the Large Hadron Collider could instead explain another type of subatomic particle. Mads Toudal Frandsen, a particle physicist, explained in a statement, "The CERN data is generally taken as evidence that the particular particle is the Higgs particle ... It is true that the Higgs particle can explain the data but there can be other explanations, we would also get this data from other particles" [8]. 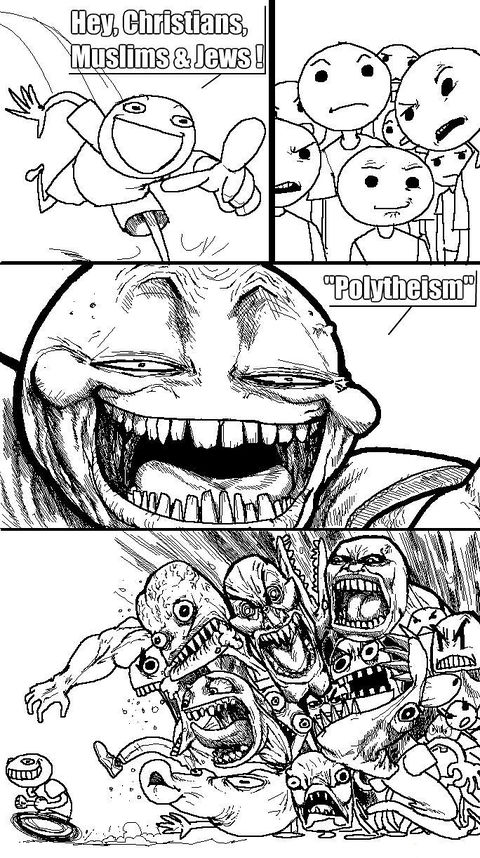 The belief in multiple gods is probably the result of an earlier belief in vaguely defined spirits, demons and other supernatural forces. These belief systems seem similar to animism, ancestor worship and totemism. In polytheism, these supernatural forces are personified and organized into a cosmic clan, used to explain natural phenomena and to establish a clan culture's role in the multiverse.

Somewhere along the way our networks exceeded us. We spent 12,000 years carving civilization out of the wild, and at the very edge of its most technical, most complex, most beautiful moment, it became wild again. Like a matryoshka doll of our human disasters, from within our safe, designed and managed world, we built forests of infinite darkness. In the spaces between our devices, we populated this new wild with the predatorial spirits we’d exterminated from the outer landscape. Once again we face disease, dark creatures, black magics, and the all-seeing eyes of evil gods, all in the worlds we’ve created between us, all embedded in our most logical and mathematical system [9].

I think I found why patriarchy feared witches in this snippet:

An old woman (who happens to be a witch) and a priest are sitting by the road having a conversation.

(The conversation starts on the classic subject of "how many angels can dance on the head of a pin?")

"No, but it is as good an answer as any you'll get. And that's what you holy men discuss is it?"

"Not usually. There is a very interesting debate raging at the moment on the nature of sin, for example."

"And what do they think? Against it, are they?"

"It is not as simple as that. It's not a black and white issue. There are so many shades of gray."

"There's no grays, only white that's got grubby. I'm surprised you don't know that. And sin, young man, is when you treat people as things. Including yourself. That's what sin is."

"It's a lot more complicated than that--"

"No it ain't. When people say things are a lot more complicated than that, they means they're getting worried that they won't like the truth. People as things, that's where it starts."

"Oh, I'm sure there are worse crimes-"

"But they Starts with thinking about people as things…"

For the sake of a "universal filesystem" and life being too short to fight over names, I have made space for an "unknowable" directory, with a sub directory "prince of darkness" to file Lucas electric wiring schemes for english motorcycles in. You never know when *that* comes in handy.

Oh, and just so you know, I have arrogated and appropriated the word "impeccability" to mean "maintaining a sense of humour, no matter what". Keep that oxygen coming!

Can phenomenal consciousness be given a reductive natural explanation? Many people argue not. They claim that there is an ‘explanatory gap’ between physical and/or intentional states and processes, on the one hand, and phenomenal consciousness, on the other. I reply that, since we have purely recognitional concepts of experience, there is indeed a sort of gap at the level of concepts; but this need not mean that the properties picked out by those concepts are inexplicable. I show how dispositionalist higher-order thought (HOT) theory can reductively explain the subjective feel of experience by deploying a form of ‘consumer semantics’.First-order perceptual contents become transformed, acquiring a dimension of subjectivity, by virtue to their availability to a mind-reading (HOT generating) consumer system. [11]

The through the wormhole series is in its 6th season, and most episodes can be found online. For Through the Wormhole Episode Scripts: http://www.springfieldspringfield.co.uk/episode_scripts.php?tv-show=through-the-wormhole.

The series provides a glimpse of the endless possibilities that our mind can produce, given enough time, motive, and resources. No answers, but an infinite number of new questions. How can we ever be sure of what is real and what is in our mind ? The human brain is a storyteller. What if the stories aren't true? How far will the mind go into producing a delusion to satisfy our most fundamental needs?