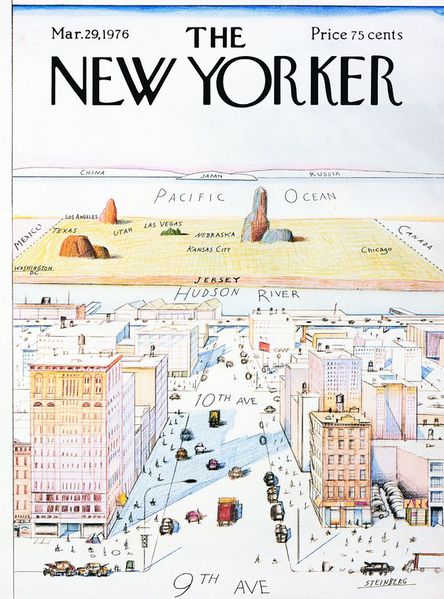 The illustration is split in two, with the bottom half of the image showing Manhattan's 9th Avenue, 10th Avenue, and the Hudson River (appropriately labeled), and the top half depicting the rest of the world. The rest of the United States is the size of the three New York City blocks and is drawn as a square, with a thin brown strip along the Hudson representing "Jersey", the names of five cities (Los Angeles; Washington, D.C.; Las Vegas; Kansas City; and Chicago) and three states (Texas, Utah, and Nebraska) scattered among a few rocks for the United States beyond New Jersey. The Pacific Ocean, perhaps half again as wide as the Hudson, separates the United States from three flattened land masses labeled China, Japan and Russia.

Fair use of the media.

Click on a date/time to view the file as it appeared at that time.

The following page links to this file: