How can I edit contents in the Wikipedia? Why is it important to include more cultural and gender diversity in the pool of editors of the most important online encyclopedia? How I can develop collective strategies to have more gender oriented and content of interest for women and trans* persons?

Contributing to the Wikipedia

Feminists have criticised the way in which knowledge is produced, made and constructed on Wikipedia. As explained by members of the Wikimedia Foundation, a 2010 survey conducted by the United Nations University found that only 13% of Wikipedia contributors identified as female. The fact that Wikipedia’s contributors are mostly male in their twenties and thirties and disproportionately Western are important factors that influence content. Women who have played a significant role in history are often missing from Wikipedia and, at times, feminist, queer and trans content are not always easily accepted on the online encyclopedia. A notable example relates to an entry about Chelsea Manning, the United States Army soldier who was convicted in July 2013 of violations of the USA Espionage Act after releasing the largest set of classified documents to WikiLeaks. When Manning formally announced her gender transition, the English Wikipedia entry under her name was quickly amended to reflect this change. A week after intense discussions regarding this amendment took place, where a majority of Wikipedians disregarded experts on transgendered issues, the article was reverted back to Bradley Manning. The article has since then returned to Chelsea Manning (at least in the English language).

What is clear is that we’re still missing important perspectives in the Wikimedia movement, and that the sum of all human knowledge that Wikimedians around the world aim to curate – has significant gaps as well. To truly increase diversity in our communities and content, the ecosystem needs an ever-increasing number of creative solutions. Partnerships, research, community organizing, socio-cultural and technical interventions should all be considered.

Several initiatives have begun over the years to address different facets of Wikimedia’s gender diversity issues. Research and exploration is ongoing; some projects have created new spaces for cultural shifts; other initiatives like Art+Feminism and WikiWomen’s History Month are steadily generating more content to diversify coverage in important topics.

Past March 2015 the Wikimedia Foundation launched the Inspire Campaign to proactively seek new ideas and project proposals aimed at increasing Wikimedia’s gender diversity. This campaign aimed at systematically encouraging, connecting, and supporting community efforts to increase gender diversity on Wikimedia projects. About 629 people participated on the Inspire pages, suggesting new approaches, endorsing ideas, offering feedback, and discussing issues. While discussions about gender were active, the conversations were generally friendly and productive — thanks to the supportive Meta community, its administrators, and the new IdeaLab friendly space guidelines.

From 266 ideas came 42 grant proposals eligible for consideration. After careful review by a committee of volunteer Wikimedians and gender-focused experts, 16 projects have been recommended and approved for funding. You can review and connect with funded projects here and get new ideas for launching your own wikistorm or edit-a-thon!

Storming Wikipedia or organising an Edit-a-thon is a tactic to respond to the lack of women, feminist, queer and trans* content on Wikipedia. These empower participants to learn collectively how to edit Wikipedia and to change content to better reflect their communities and histories. Learning to edit Wikipedia can seem daunting so collectively editing and creating pages about trans*, women and queers is a great way to confront fears, add feminist, queer and trans content on the online encyclopedia and Do-It-With-Others (DIWO) in a safe space.

There are always great reasons to organise a wikistorming on any day! However, if you are looking for broader impact and be connected to others such gatherings often happen on these two days: Ada Lovelace Day in mid-October and March 8 International Women's Day. Once you have decided on a date, gather a group of friends and friends of friends who want to learn or already know how to edit Wikipedia and identify a safe space where to hold the event. It can be held in someone’s home, in a community centre, at an art centre or at a community organisation. Make sure you find a place that is accessible and ideally that already has a feminist base. Wikistorming may last for a day or half a day. Before the wikistorming or as part of it, decide which Wikipedia entries you want create or which existing page you want to edit. Be realistic in your goals and don't put too many edits on your plate! To edit Wikipedia carefully it takes time. If you want to organise a wikistorming visit the resource place drafted by the network FemTechnet. 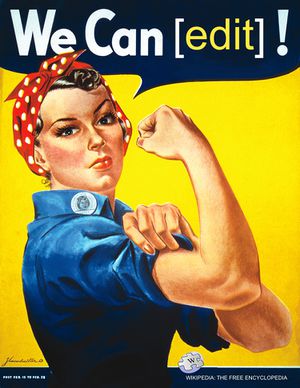